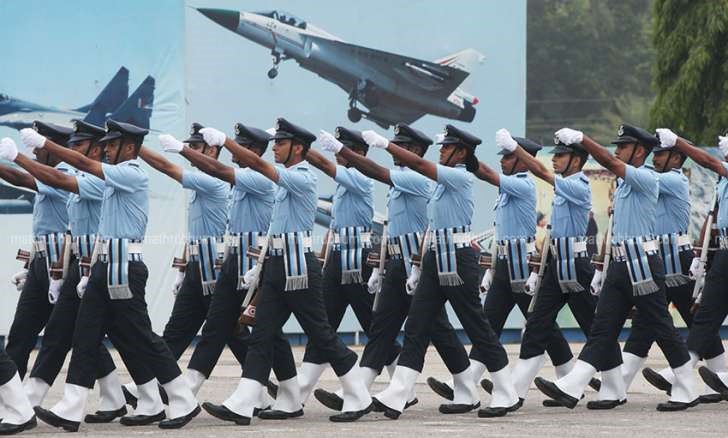 The National Cadet Corps is the Indian military cadet corps with its head Quarters at New Delhi. It is open to school and college students on voluntary basis. The National Cadet Corps in India are a voluntary organization which recruits cadets from high schools, colleges and Universities all over India. The Cadets are given basic military training in small arms and parades. The officers and cadets have no liability for active military service once they complete their course but are given preference over normal candidates during selections based on the achievements in the corps.

The NCC play an important role in imparting the values of duty, discipline and sense of responsibility in young minds hailing from different parts of the country.

It’s a great achievement for our college that No.1 Kerala Air Squadron NCC, Thiruvananthapuram, the first air wing NCC in the state started four Senior Division/Senior Wing NCC units comprising 50 cadets each in Thiruvananthapuram district in which Government College, Nedumangad is one among them.

The students who are interested in pursuing gliding, microlite flying, aeromodelling, weapon handling and firing can enrol as NCC cadets in which at least 33% seats are reserved for girls. This year our college enrolled 15 cadets in the seats allotted for us from first year students in which 08 are girls.

Mr. Muneer M., Assistant Professor of Political Science is attached with the unit as the Care Taker.

“I do hereby solemnly promise that I will serve my motherland most truly and loyally and that, I will abide by the rules and regulations of the National

Cadet Crops. Further under the command and control of my commanding officer I will participate in every camp most sincerely and wholeheartedly”.

We the cadet of the national cadet corps, do solemnly pledge that we shall always uphold the unity of India. We resolve to be disciplined and responsible citizen of our nation. We shall undertake positive community service in the spirit of selflessness and concern for our fellow beings.

The NCC in India was formed with the National Cadet Corps Act of 1948. It was raised on 15 July 1948 The National Cadet Corps can be considered as a successor of the University Officers Training Corps (UOTC) which was established by the British in 1942. During World War II, the UOTC never came up to the expectations set by the British. This led to the idea that some better schemes should be formed, which could train more young men in a better way, even during peace times. A committee headed by Pandit H.N. Kunzru recommended a cadet organization to be established in schools and colleges at a national level. The National Cadet Corps Act was accepted by the Governor General and on 15 July 1948 the National Cadet Corps came into existence. During the 1965 and 1971 wars with Pakistan, NCC cadets were the second line of defence. They organised camps to assist the ordinance factories, supplying arms and ammunition to the front, and also were used as patrol parties to capture the enemy paratroopers. The NCC cadets also worked hand in hand with the Civil Defence authorities and actively took part in rescue work and traffic control. After the 1965 and 1971 Indo-Pak wars the NCC syllabus was revised. Rather than just being the second line of defence, NCC syllabus laid a greater stress on developing qualities of leadership and Officer-like qualities. The military training which the NCC cadets received was reduced and greater importance was given to other areas like social service and youth-management.

All others who joined NCC are known as Cadets.

This training is mostly carried out in schools and colleges by the cadets. In addition, depending upon the type of service, basic knowledge of that service is imparted to the cadets e.g gliding , powered flying for Air Wing cadets and boat pulling, sailing for Naval Wing cadets form part of institutional training. These activities comprise approximately 50% of the entire syllabus.

Cadets must be made to understand the aim and purpose of teaching drill, so that they are suitably motivated and do not take it as “fatigue”. Emphasis will be laid on correct bearing, marching, saluting and arms drill. Inter-squad competitions may be organized to create interest.

Adventure activities have been incorporated in NCC training with the aim of inculcating and strengthening leadership traits amongst the cadets. These activities in NCC can be broadly divided into the following.

This is a very important activity. It is done to increase international understanding and bolster awareness. These exchanges are done with NCC community of 10 countries namely Australia, Bangladesh, Bhutan, Canada, Maldives, Nepal, Singapore, UK, Russia and Vietnam at international level.

All OC Units are keeping a check of Institutional training regularly to ensure proper attendance. Attendance registers are marked before the commencement of the parade and NOT repeat NOT after the parade.

All DDG’s are putting an effective monitoring mechanism which is in place to check attendance and conduct of this training.

The eligibility conditions and the general procedure for the conduct of the Certificate Examination for Cadets of Senior and Junior Division/Wings NCC (All wings) have been issued by the HQ from time to time.

For “A” Certificate Examination (Junior Division)

For “B” Certificate Examination (Senior Division)

Permission to Appear in Certificate Examination after Discharge

The ex-cadet so eligible can appear for the examination at any place in India by applying for the same, alongside with discharge certificate, to Local Unit Commander. The Group Commander is empowered to accept such requests from the ex-cadets.

With a view to give Cadets a chance to apply for the NCC Special Entry Scheme, in case their grading improves, it has been ruled that:

Some Advantages to NCC Cadets